Here is how Day 4 of the APAC North Division looked like:

Leading Fnatic from inside the server once more, Etienne "Mag" Rousseau has been on fine form and started his team's match with a quick-fire 1v3 clutch against Spear Gaming.

The play was even more impressive as it came on the defense and was seemingly off imperfect information, but good instinct from the Australian saw him deal with an imperfect cross-fire to kill all three players in five seconds.

It seems like being away from competitive play for just under a year has not dulled Mag's abilities much, with Fnatic also looking rejuvenated since his arrival in Japan  inh the middle of Stage 2.

Player of the day: Ayagator 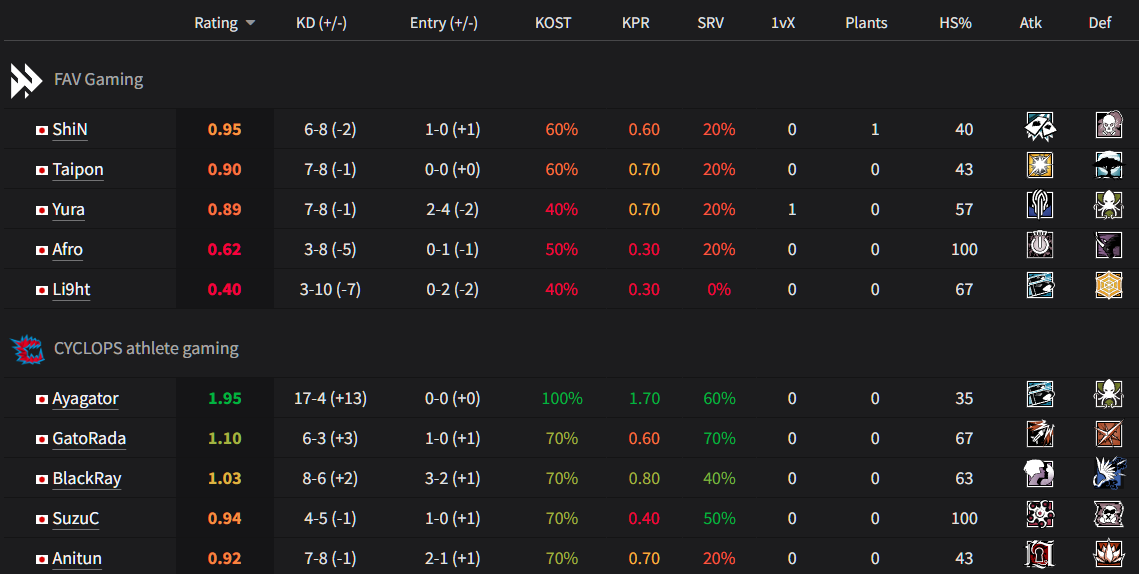 While Mag was the top-rated APAC North player this week with a SiegeGG Rating of 2.04, owing to two clutches, the player of the day was undoubtedly CAG's Taiyo "Ayagator" Hirayama.

The Japanese man took his team's game against local rivals FAV gaming by the scruff of its neck and finished with 17 kills to a mere four deaths, yielding a K-D of +13 and a kill frequency of 1.70 kills per round.

Ayagator also had an impact in each of the 10 rounds played, whether it was by getting kills, being traded, planting or disabling the defuser, or surviving until the end of the round (KOST).

Surprise of the day: DWG KIA

DWG KIA's opponents this week were REJECT, who have now taken seven points out of a possible nine against the "Big Three" -- SANDBOX, CAG, and DWG. Before this, they had already beaten SANDBOX in regulation time and taken CAG to overtime in a match where they could have easily won, as well.

Them beating DWG this week, then, is not a big surprise. The surprise is DWG KIA itself and the lackluster performance from its players.

In the post-match interview, Toya "solty" Kojima revealed that his team viewed "the biggest threat" to them as "RIN using that Ash", as SiegeGG had also identified. As such, REJECT started the match by banning Ash itself, forcing Jang "RIN" Byeong-uk to go to Zofia instead.

While RIN was targeted, he was not alone in performing poorly, as his teammates Park "Woogiman" Jin-wook and Jo "coted" Sung-Joon had even worse SiegeGG Ratings, while star player Yoo "yass" Sang-hoon only managed a 1.05 Rating in his second APAC North game back.

As a result of this loss, and their preceding regulation-time loss to CAG, DWG are suddenly only outsiders for a place at the Jönköping Major in November. They are yet to play SANDBOX, a team that beat them in Stages 1 and 2, and are already in fifth place with just six points from four games.

Here's a quickfire rundown of other top moments in APAC North last week.

SANDBOX Gaming nearly joined their countrymen DWG KIA in becoming outsiders for a place at the Jönköping Major. Like them, SANDBOX also lost to REJECT in regulation time and have since had no further room for error.

But on play day four, SANDBOX found themselves trailing Talon by a score of 4-5 and it was looking like they were about to concede a second regulation-time loss. Fortunately for their fans, they stepped up to win three rounds in a row and fought off a spirited Talon to keep themselves in second place.

SANDBOX's narrow win also featured a curious decision from Talon once more -- yet another change to its playing roster on game day.

Sporting a six-man roster, Talon last week opted to bring their Stage 2 signing Yun "Marb1e" Seok-hyun into the playing roster in place of Kwon "h3dy" Yu-geun last week against DWG KIA. They were blown away 7-3 and needed no further indicator that their best team was with h3dy in the playing roster.

So far this season, they have played three games with the roster that featured against SANDBOX, including a 4-7 loss to CAG and a 7-3 win over Spear Gaming. It is unclear why they opted to play with Marb1e last week, but it could have been related to internal issues, like DWG had with yass, or could have simply been a case of illness or the like for h3dy.

REJECT are very likely going to the Major 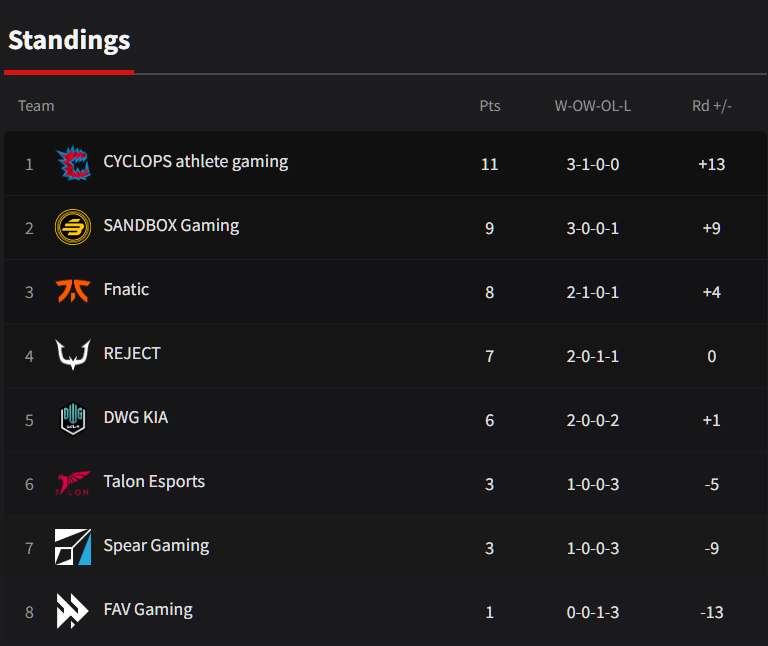 Having cleared the "Big Three" to great success, collecting seven of nine possible points, REJECT are looking very good value for a place at the Jönköping Major.

CAG and DWG KIA are yet to play SANDBOX and things could work out for REJECT that their two point gap to second-placed SANDBOX is wiped out. Even tying SANDBOX in terms of points will be enough for REJECT, as they hold the head-to-head over the Koreans.

REJECT, meanwhile, only really have Fnatic to worry about in their final three games. Spear Gaming and FAV are unlikely to pose much of a threat, though Fnatic have been enjoying an obvious uptick in form since Mag joined the team in Japan after two years of struggle.

Should REJECT clear them and should SANDBOX drop two points total against CAG and DWG -- a very real possibility -- it is almost certain that they will be headed to the Major, alongside CAG.