Yesterday the European League started back up again for Stage 3, with seven new rookie players, one new organization, and five games to get us all back into the action.

Play of the Day: Amision’s 1v5

The best play of the day was Pavel "Amision" Chebatkov’s 1v5 Ace Clutch in the space of 17 seconds without losing a single percent of health while attacking Chalet’s basement objective versus MNM Gaming.

This will certainly be a top-three play of the entire year.

Player of the Day: Leadr

While he didn’t get the highest SiegeGG Rating, Leadr is undoubtedly the player of the day as the British player beat Rogue in his professional debut.

First came a 1v1 clutch against Rogue on Smoke, as he wasted enough time to get an easy post-plant kill.

He then followed this up with what was effectively a 1v3 clutch against Kanto, Deapek, and Cryn to bring the scoreline to 7-6:

And then another 1v1 against LeonGids to win his first professional map:

His final clutches was almost not needed; in round 12, he almost brought a 2v5 back before running out of time half a second before he would have secured the final kill.

Surprise of the Day: Natus Vincere

It is not unsurprising to see Major champions falter when they return online. DZ missed out on the Berlin Major after nine events, and TSM and FaZe both missed Charlotte after winning SI22 and the Sweden Major, respectively.

Finally, here’s a quickfire rundown of other notable moments in the EUL on Monday:

12 days after Tim "AceOfPyrite" Leaver revealed that he had suffered a stroke and had lost a portion of his vision, he was back casting the European League from home. Ace detailed how he has overcome these issues to be back at his job ahead of the Outsiders vs Wolves matchup:

Thatcher & Ash are back

Like a sight from 2019 Siege, two of the game’s most iconic operators saw a resurgence yesterday.

Ash saw a 26% pick rate ahead of Finka on just 10%, primarily due to the recoil changes bringing her back in as an operator of choice for fraggers. Amision, Benjamaster, and Spoit each excelled on her.

Thatcher saw a lot of play also as he wasn’t banned in any of the five games. This is primarily due to the addition of the Impact EMP secondary gadgets. Now even if you do ban Thatcher, the attack will just bring mini-Thatchers instead.

Meanwhile, ASTRO won a 1v1 on time by simply waiting the enemies out:

And Gruby got a trade kill to end round seven:

On Round 6 of MNM’s Chalet attacks, neLo and Neo showed off the perfect clear of the back stairs using EMPs and Grenades. While we’ve seen this before here and on Consulate’s Yellow Stairs, this was executed perfectly. With Thatcher no longer being banned constantly and the EMP secondary gadgets coming into play, this has become much easier to do and will likely force teams off of these popular holds.

Speaking of the Impact EMPs, they were used for the first time in professional history off-screen by Amision on round eight against MNM. Amision was playing Osa, and Outsiders lost this round.

LikEfac got double Shaiiko’s kill count in his debut game

14 kills to six deaths meant that Théo "LikEfac" Mariano was the top-rated player during BDS’ win over Secret. While the result was expected, this was a dream performance and one that should make BDS’ rivals worry. You thought facing Shaiiko was tough? Try Shaiiko and LikEfac on entry with statistically the world's best support, BriD, right behind. 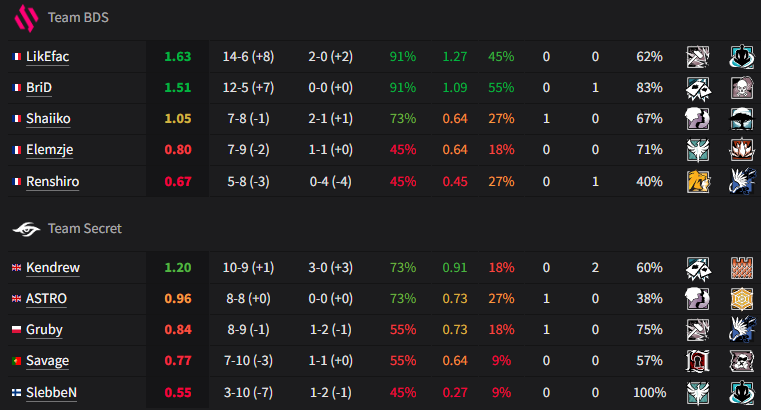 In the round that saw Wolves take the victory over Outsiders, we also saw a very rare Cluster Charge kill from dan’s Fuze: