Top moments from EU League Day 2: Deapek coolly reels off another 1v4, Shaiiko is back on Ash, ex-Empire trio get first win

It was another bad day for G2, as Outsiders and Rogue corrected course.

Week two started in Europe, as Russia tried to get their first win, France tried to stay flawless, Rogue and G2 tried to come back from a weak start, and some of the biggest rookies in the region played off in the last match of the day.

Play of the day: Deapek 1v4

Returning to Villa, a map Rogue last played during the Berlin Major grand-final, Deapek picked up where he left off in that game and pulled off another unbelievable clutch to add to the 1v4 and 1v3 he won against FaZe last month on the same map.

Put in a 1v4 situation with an SMG-11, he played it quite literally to perfection to pop four heads in 24 seconds. Such clutches -- 1v3 and 1v4s -- are usually rare. But the consistency Deapek has to be able to pull off clutches like these, repeatedly, is unheard of before, especially for a support player.

Player of the day: Shaiiko

After a weak week one, Shaiiko returned against Wolves to net 19 kills total on his classic Ash.

This just about bettered BiBooAF’s 17 count, but the victory really came from how he worked with his new teammate, LikEfac. While BiBooAF’s teammates ended with eight, eight, five, and five kills, LikEfac ended with 15 of his own and both Shaiiko and LikEfac went 5-1 on entry -- the eight other players in the server earnt four opening kills between them.

This is our first real look at this powerhouse of a duo and Shaiiko is on top with a 1.69 SiegeGG Rating.

Surprise of the day: Team Secret

G2 finished the last two Six Majors in the quarter-finals while Secret finished ninth place in the last two EUL stages. Now, with three new players for both rosters combined, Secret managed to pull off a major upset thanks in a large part to SlebbeN’s performance.

Finally, here’s a quickfire rundown of other notable moments in the EUL on Monday:

A win over MNM Gaming in a 7-5 scoreline finally marks the return of dan, Always, and JoyStiCK as they got on the board with their new team.

The win coming against MNM is also symbolically notable, as the very last European team the trio played on Empire was also MNM. The SI open qualifier team and recent Challenger League victors had beaten Empire 2-0 during the SI22 group stage.

With six wins in their last seven meetings, BDS were the clear favourites against their countrymen on Wolves Esports. While they looked very weak at the start, they grew into it as both sides won their offensive halves on Clubhouse.

The Wolves will be disappointed that they still can’t beat BDS after over a year of improvements. At the same time, BDS, and LikEfac in particular, will be happy that they are clearly strong EUL contenders once again after missing out on the Berlin Major.

Wolves came back from a 2v5 to a 2v3 with one downed BDS player. Then, Mowwwgli died before BiBooAF finished off BriD and injured Renshiro to set up a 1v1 between him and Shaiiko. These two traded themselves out, meaning we got an exceedingly rare 10-kill round.

When this happens, if the defuser is planted, the attackers win, otherwise, the defenders win. As such, BiBooAF clutched a 1v3 despite dying:

Team Secret are on a hot streak right now

Across Team Secret’s last seven games they've beaten Wolves, Heroic, G2, BDS, and TT9. That’s an incredible lineup of teams. The last time Secret lost a game in overtime was also in May in Stage 1 -- since then, they’ve won four overtime matches running.

Next up, Secret has NAVI and Outsiders. Both are tough teams, but ones they clearly can take on considering their recent run of form. A win against either of these makes Secret a legitimate mid-table contender.

During NAVI’s overtime win over Heroic, Jume and T3b both ended on a 1.23 SiegeGG Rating to be top of the charts. Leadr also finished as the second-best NAVI player. These rookies made the difference in the matchup, as jume and Meloo for Heroic netted five kills in the final two overtime rounds to win the game.

Between 1:25 and 1:20 on the timer, Yuzus managed to net four kills as he found an enemy everywhere he turned:

M1loN fails to kill Solotov due to the new grenade nerf

As part of the Operation Brutal Swarm update, fragmentation grenades’ effective range was nerfed, and their damage curve changed. While this has led to fewer grenades being picked by the attackers, we’ve now also seen the first example of the range reduction clearly in action.

M1loN would’ve almost certainly got the opening kill against Solotov with this grenade last stage, but Solotov survived and was revived by a teammate to keep the game in a 5v5 situation.

While we’re only two games in, the scoreboard is already almost identical to that of the final Stage 1 standings. The only difference is G2 has dropped from fourth to ninth place while MNM has fallen from fifth to sixth. 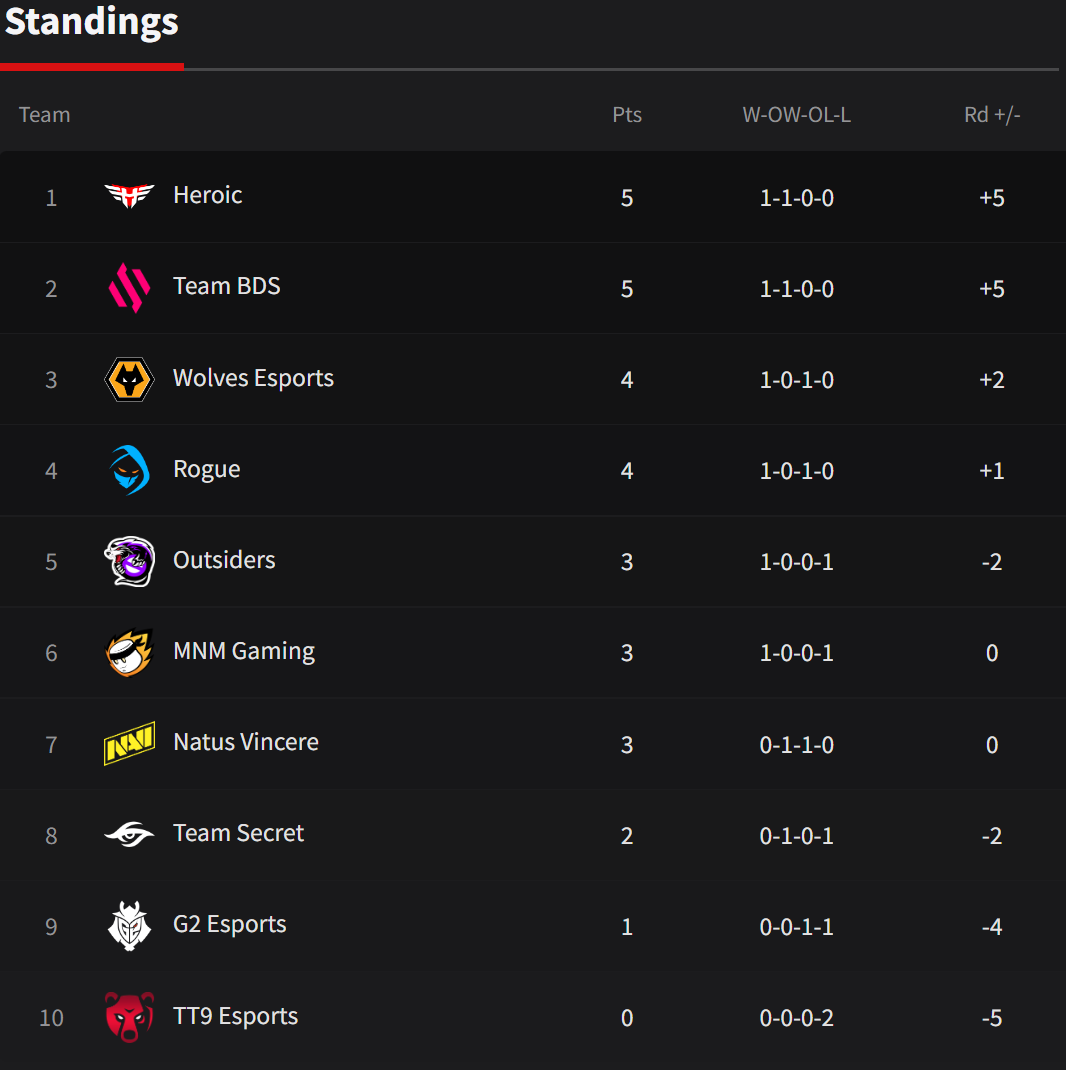