Soniqs remains on top as OxG and TSM both falter.

Week two started in North America with a shock return for Skys, Mirage and Parabellum hoping to keep their momentum going, and TSM and Soniqs both trying to stay at the top.

Play of the day: Dpfire 1v2 ace on Sens

In one of the first good plays we’ve seen on last season’s operator, Sens, Dpfire managed to earn an ace clutch against TSM during their 7-4 victory.

Player of the day: Geometrics

While playing purely support roles, Geo ended with a 3.0 kill-death ratio and three plants on Thermite. This earned him the highest SiegeGG Rating in the league for play day three at 1.62 and helped his team to a strong 7-2 victory over XSET.

Surprise of the Day: Mirage

While their win over Astralis last week should’ve been an indicator, it is still surprising to see Mirage, a team consistently bottom of the standings in NA, beat a top-level team, especially in such a strong manner.

Their 7-4 win over Oxygen Esports continues a worrying run by OxG as they remain on just one point a third of the way through the stage. They still can qualify for the Major, NAL Finals, and Six Invitational, so not all is lost yet, but they would’ve definitely wanted to rack up points here before facing TSM next week, or Soniqs and DZ the week after that.

Finally, here’s a quickfire rundown of other notable moments in the NAL on Tuesday:

BlaZ finds an Ace trapped in a corner

As well as Dpfire’s ace, Parabellum also won an ace as their new top fragger, BlaZ, caught two players from the back of Border’s Office before killing two more who pressured him to recover the defuser. Finally, he then dropped the hatch to claim his ace:

Skys looks at home in a new role

In what was Skys first game for DarkZero since FURIA knocked DZ out of the 2021 Six Invitational, he excelled as a secondary fragger behind Panbazou. This contrasts to SI21, where he was DZ’s Thermite player.

This new role is one Skys is used to from the peak of his career as it allowed DZ to get their first non-overtime map win since July.

This win was locked in as DZ finished their unstoppable offensive half as, after 3-3 on the defence, they won four of the following five rounds. The lone round they lost included a quadruple kill from Surf.

Promising start for SSG despite being in fifth

Parabellumm were last week’s most impressive team with wins over XSET and OxG. Yesterday, SSG beat them in a dominant 7-3 scoreline.

Before this, SSG were also the only team to challenge the flawless Soniqs roster as they took them to round 12. Soniqs needed three players with double-digit kill counts to secure the game before overtime.

This is, therefore a fairly promising start for SSG even if their point total doesn’t reflect it. Their next games come against an on-form Mirage and DarkZero, which will be a Skys revenge match. Two games that should not be missed.

After three games, Soniqs have the full nine points while one point then separates second from sixth: 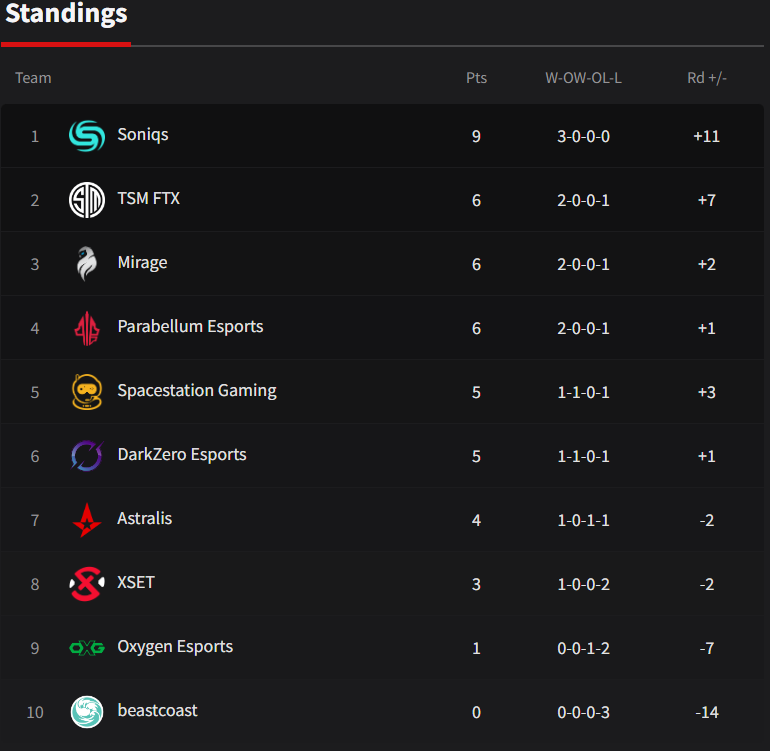