Aruni is a defending Rainbow Six Siege operator, who is played in 15% of all rounds in SiegeGG-tracked matches.

sprOnigiri has played the most rounds in their career with Aruni. They are closely followed by DjuZ, whose favorite operator is Zofia.

Aruni is a Rainbow Six Siege defender who was introduced in the game with the launch of Operation Neon Dawn. Since her release, Aruni has made the attackers' jobs a bit more difficult.

Aruni is a two-speed, two-health operator. Her Surya Gates are a pivotal part of the current defensive meta, so mastering her gadget and loadout is a must.

Let's find out more about Aruni and what she can bring.

Aruni was first interested in the Royal Thai Police (RTP) when she was a private detective, as she discovered a bomb plot in Bangkok. According to Ubisoft's biography, "her knack for connecting the dots between seemingly-unrelated incidents earned her grudging respect from Thailand's male-dominated law enforcement agencies, as well as hostility from numerous criminal syndicates".

Aruni joined the RTP after she was offered a detective position with the "Crime Suppression Division". However, Aruni's police career ended when "she was nearly killed during an operation in Bangkok".

After recovering, she was contacted by Jaimini "Kali" Shah. According to Ubisoft's biography, "Kali's access to cutting-edge prosthetics was likely a factor in Aruni's decision to join Nighthaven". 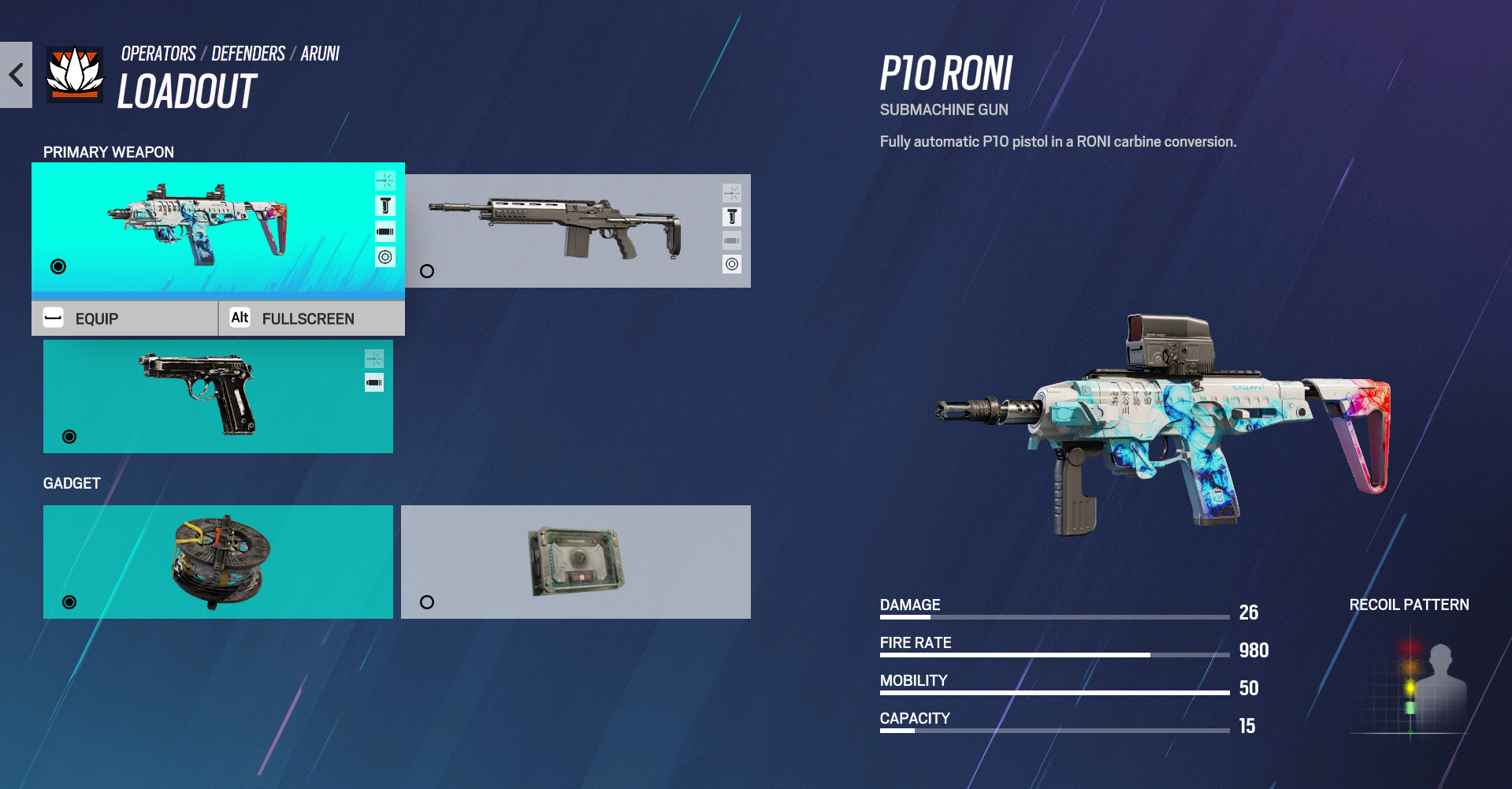 Aruni's loadout is versatile, as you can choose between the P10 Roni and the Mk 14 EBR. However, despite the P10's impressive fire rate, this gun is not what it used to be. With just 15+1 bullets per magazine, many players have moved on and swapped this gun for the Mk 14 EBR. On a personal note, I like playing the P10 when roaming, and the Mk 14 EBR when staying on the site or playing as a flex.

The PRB92 is Aruni's only secondary option, while she can choose between bringing two sets of barbed wire or a bulletproof camera. You should pick depending on what your teammates bring to the battlefield.

Aruni's role in Rainbow Six Siege isn't clearly defined, but many players use her as a roamer. If you play her like that, you should try to stay alive to surprise the attackers with a late-round flank.

If you play her as a flex, you can focus on staying in a room and making attackers lose time. You can surround yourself with Aruni's gates, forcing attackers to lose time and utility to clear you. If you do that successfully, your teammates will probably have an easier end to the round.

How to use Aruni's gadget in Rainbow Six Siege

As we previously mentioned, Aruni's gadget is the Surya Gate. She has up to three gates that can be deployed on doors, windows, hatches, or walls. Although both attackers and defenders will be able to see through the gate, walking or jumping through it will deliver damage to the attackers. Meanwhile, defenders will deactivate the gate when they get close to it.

However, attackers will have to throw utility to temporarily deactivate the gate. Keep in mind that if a defender throws a C4 or any other piece of utility, the gate will also be deactivated. For defenders, that's a waste of utility as they can walk in without being damaged.

When a Surya Gate is deactivated, players can reactivate it again by waiting and shooting the device once 30 seconds have passed.

There are many ways to use Aruni's gadget. The most popular one is to force attackers to lose utility. It is popular to see Aruni's gates combined with Jäger's or Wamai's devices, and even Castle barricades or deployable shields.

Aruni's gates can also be used as breach denial. In order to do that, Aruni must place the gates in the reinforced wall from the outside and stay next to it on the inside. Remember, Surya Gates are bulletproof and they can only be deactivated by throwing something at them.

Aruni gates can be countered with any attacker device. That includes drones, stun grenades, frag grenades, and even other attacking utilities such as Nomad's Airjabs, Iana's Gemini drones, Capitão's arrows... literally anything.

Nevertheless, as we previously mentioned, Aruni's gates can be re-activated by shooting at them after some time. Being able to re-activate the gates in the final stages of the round might be pivotal in the final result.

Aruni is a very recent operator in Rainbow Six Siege, so there are not many skins for her. However, she has access to some of the best skins in the game. If you usually play with the P10 Roni, this skin is a must-have. We really think is one of the best skins in the R6 Share program, as it combines exotic colors and the kanji characters written in the gun skin are CAG players' names when this was first introduced. You can purchase it for just 300 R6 Credits. 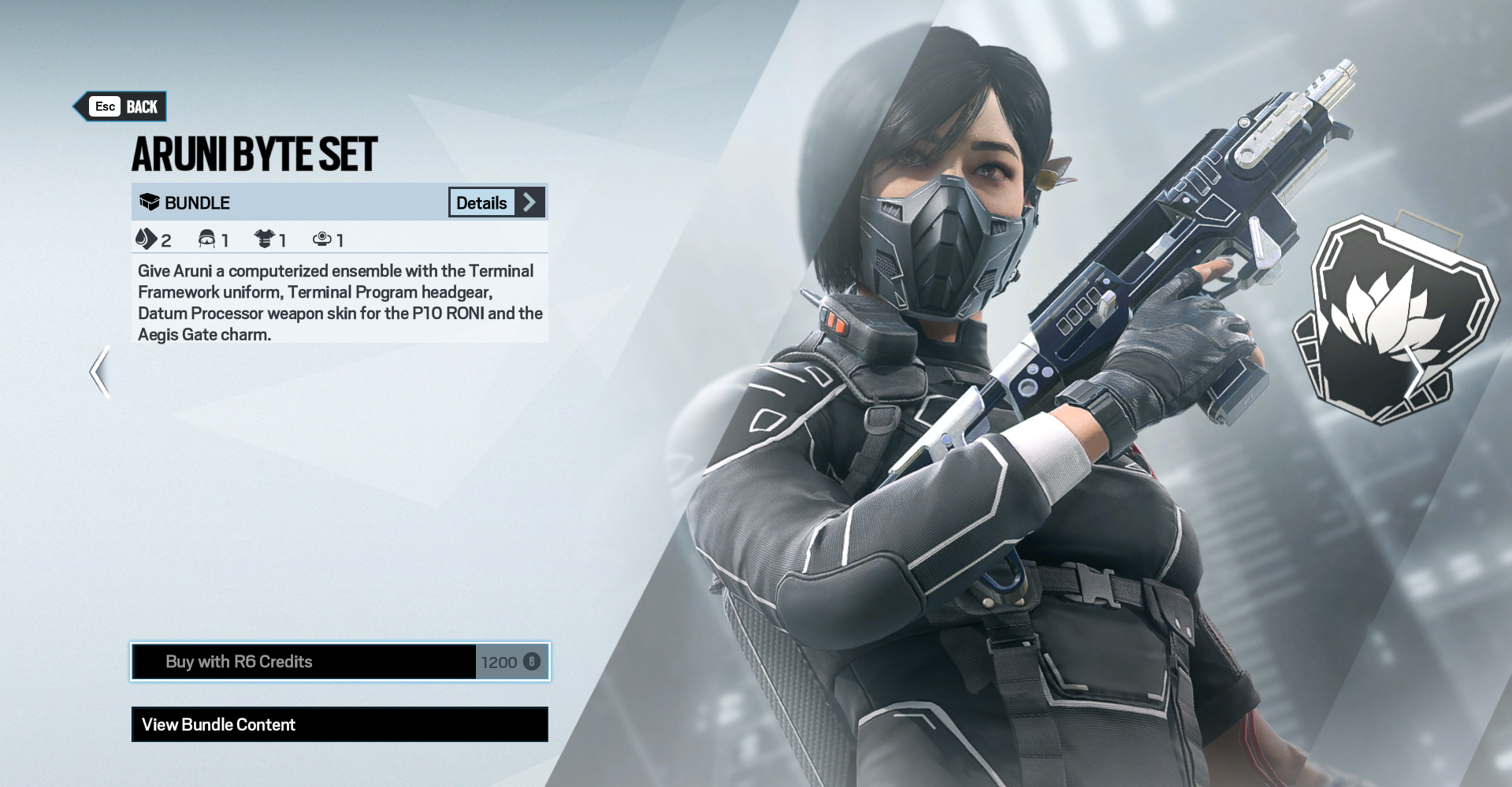 Aruni's Byte Set is her only bundle in the store right now. You can purchase it for 1,200 R6 Credits. 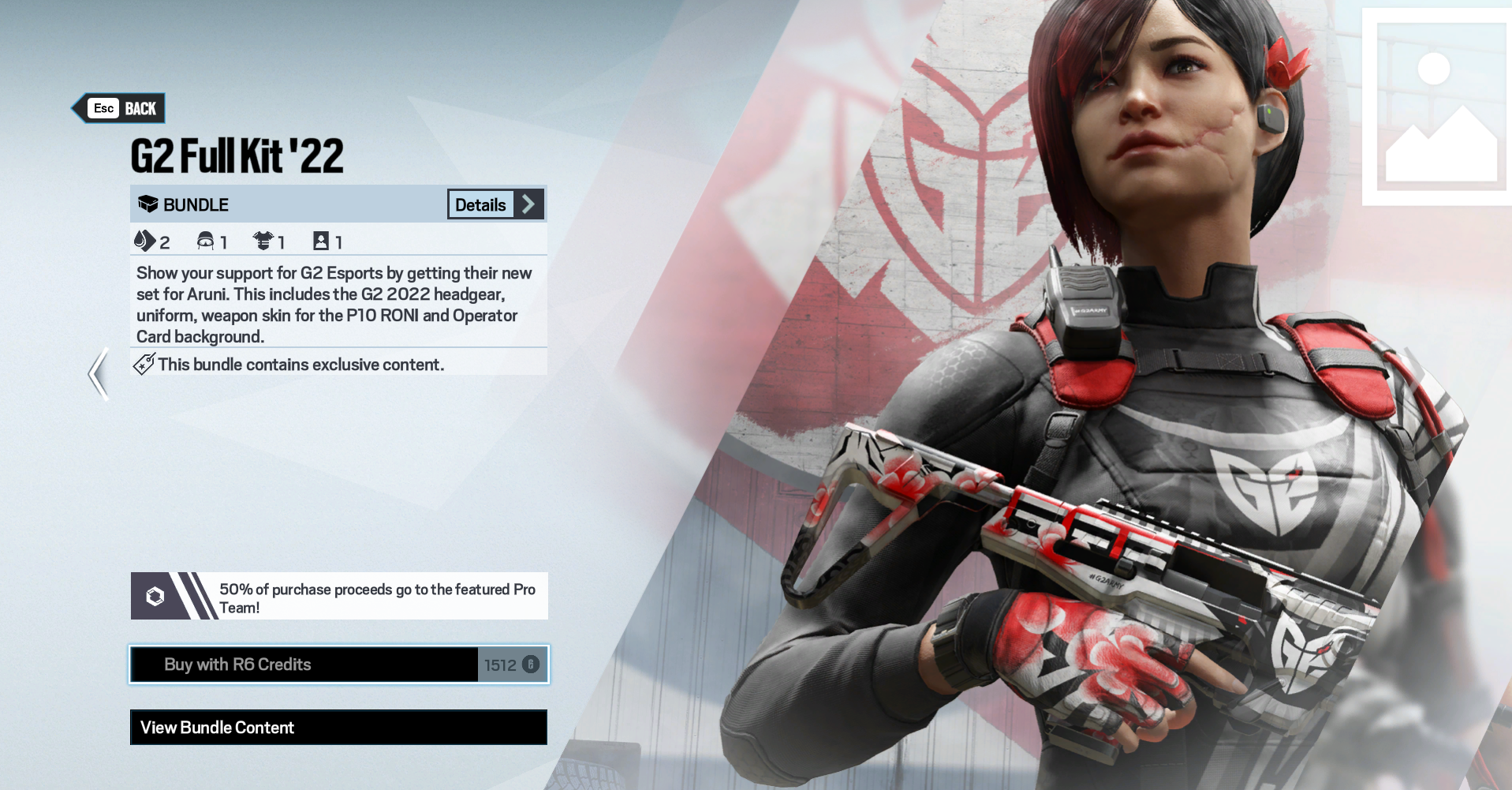 Another R6 Share cosmetic is on the list, as you can purchase G2 Esports' Aruni bundle for 1,600 R6 Credits.