Thermite is an attacking Rainbow Six Siege operator, who is played in 38% of all rounds in SiegeGG-tracked matches.

Kamikaze has played the most rounds in their career with Thermite. They are closely followed by BriD, whose favorite operator is Smoke.

Thermite is one of the best operators in the game, no cap. He has everything: smokes and a strong primary weapon to defend himself. In the hands of a good support player, Thermite can be differential.

All of that combined with his exothermic charges makes him one if not the best hard breacher in Rainbow Six Siege. This being said, let's have a look at Jordan "Thermite" Trace's profile.

Read more: What is a hard breacher in Rainbow Six Siege?

We don't know much about Thermite's childhood, as Ubisoft's background information begins with his decision of joining the Corps straight out of high school. We know that he went to Iraq, where "he obtained enough experience to volunteer as an explosive ordnance disposal technician."

After his second stay in Iraq, Jordan decided to go back to university, where according to Ubisoft he "earned a Bachelor of Science in Chemistry." Later on, he joined the FBI where he spent a few years as a field agent. He moved on and got enrolled in the FBI SWAT team, and later on moved to Team Rainbow "where he has shown further interest in research and development on gadget upgrades."

Ubisoft's biography concludes with a comment on his hometown, Plano: "Trace's hometown Plano has a major concentration of Chinese Americans, and as such Trace has conversational level of Mandarin." 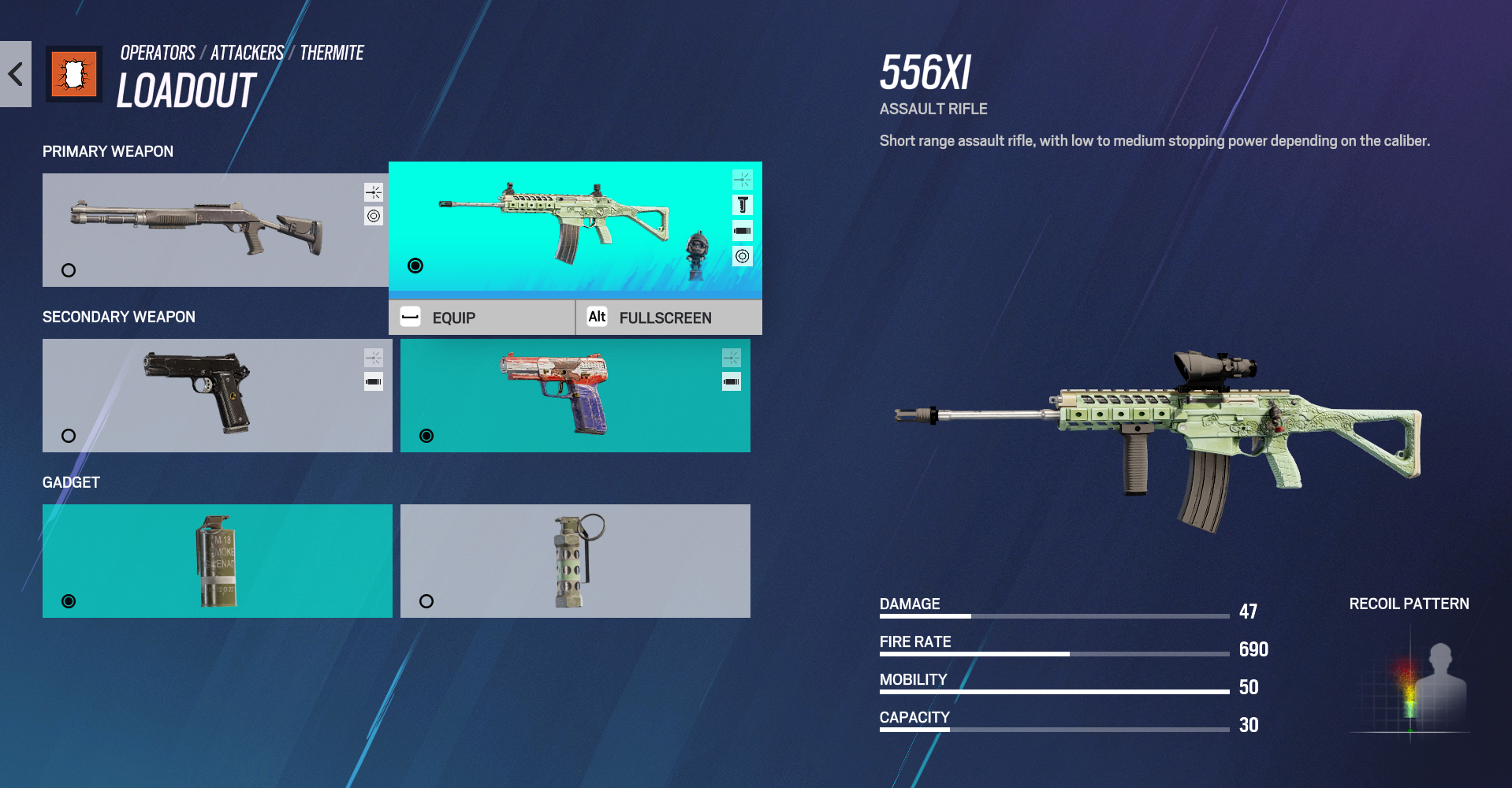 Thermite has a complete kit of weapons and gadgets, but players usually go for the same combination: 556XI as primary, 5.7 as secondary, smokes as a gadget.

The only debate would be in the secondary weapon choice — 5.7's magazine is bigger, so if your aim isn't the greatest, that's your best option. If you are proud of your aim, the M45 might be better for you as it delivers more damage.

There's no debate here: Thermite is a hard breacher. Despite the great number of hard breachers in the game, Thermite is surely the best — the original. He was the first of his kind in the game, and he is still the most picked for opening walls. Hibana and Maverick can be used to open hatches, while Ace is the combination of these two and Thermite.

With two drones and two smokes, Thermite is a perfect support. He usually does everything, except for getting kills: opening walls, gathering information, throwing the smokes, planting, and covering the plant. That's what a Thermite should do. However, his 556XI can be an awesome weapon in gunfights, especially in long-distance duels.

If you enjoy playing support, you must master Thermite.

How to use Thermite's gadget in Rainbow Six Siege

As we mentioned before, Thermite is a hard breacher. This means that his main goal is to open reinforced walls. So, being killed early in the round might be a death sentence for the attackers.

It is very important to place your drones and use your two exothermic charges before taking risky gunfights. Thermite is not a fragger but a support — so please, keep that in mind!

In order to use Thermite with no complications, you need someone to partner with you and help at cleaning any devices that stop the operator from opening reinforced walls. Having an operator like Thatcher, Kali, Twitch, or Maverick will make Thermite's job way easier.

Thermite counters are defenders that can electrify or jam reinforced walls, such as Bandit, Kaid, and Mute.

We went through this idea in Hibana's Rainbow Six Siege operator guide.

Thermite has been around since the launch of the game, so he has many bundles and skins to pick from. We have put together some of the best bundles for Thermite! 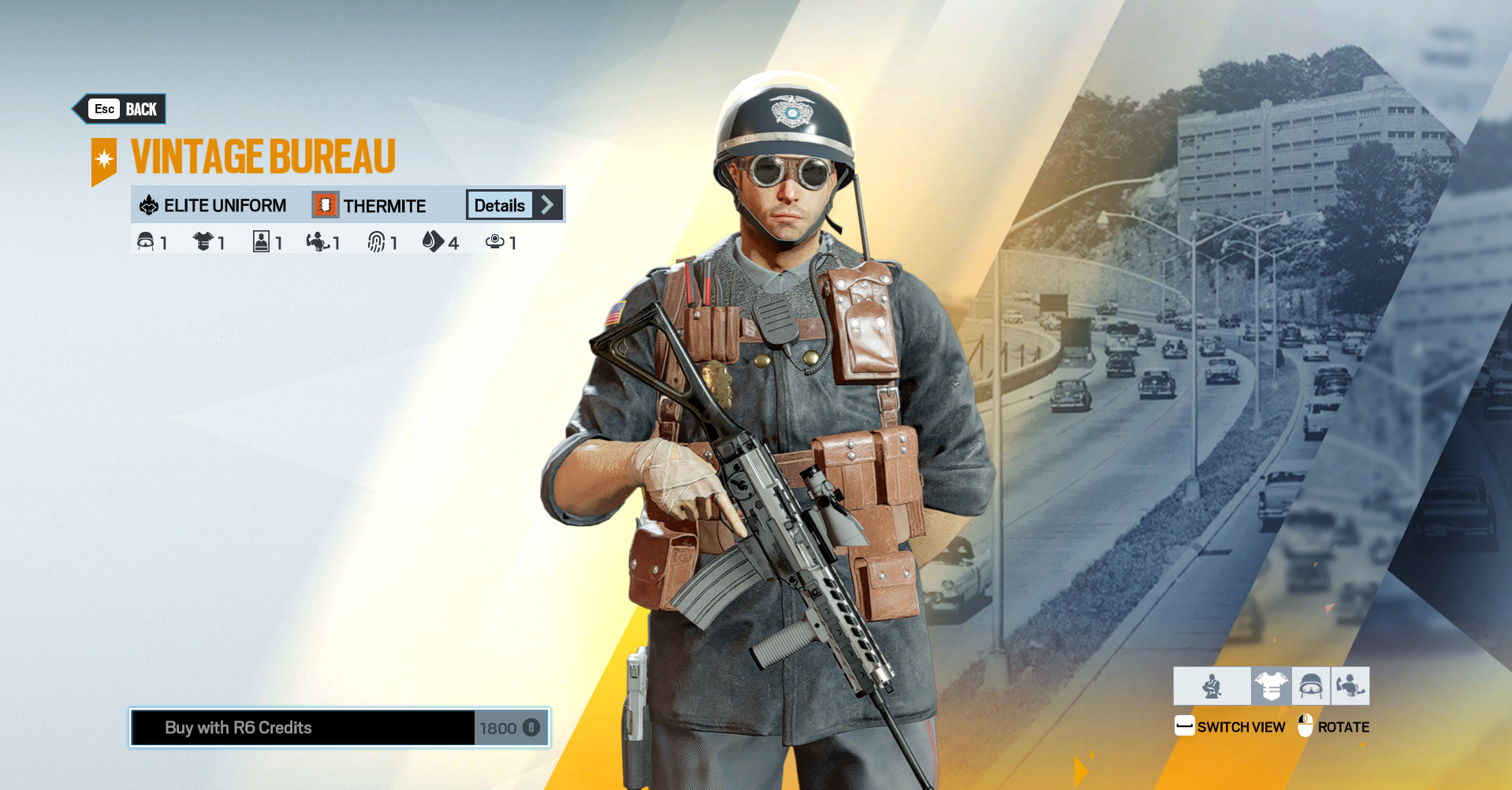 Thermite has an Elite skin named Vintage Bureau, with a very special victory celebration — his hands are on fire when he finishes the game as MVP. So, although the skin looks quite normal, believe us, the celebration doesn't! 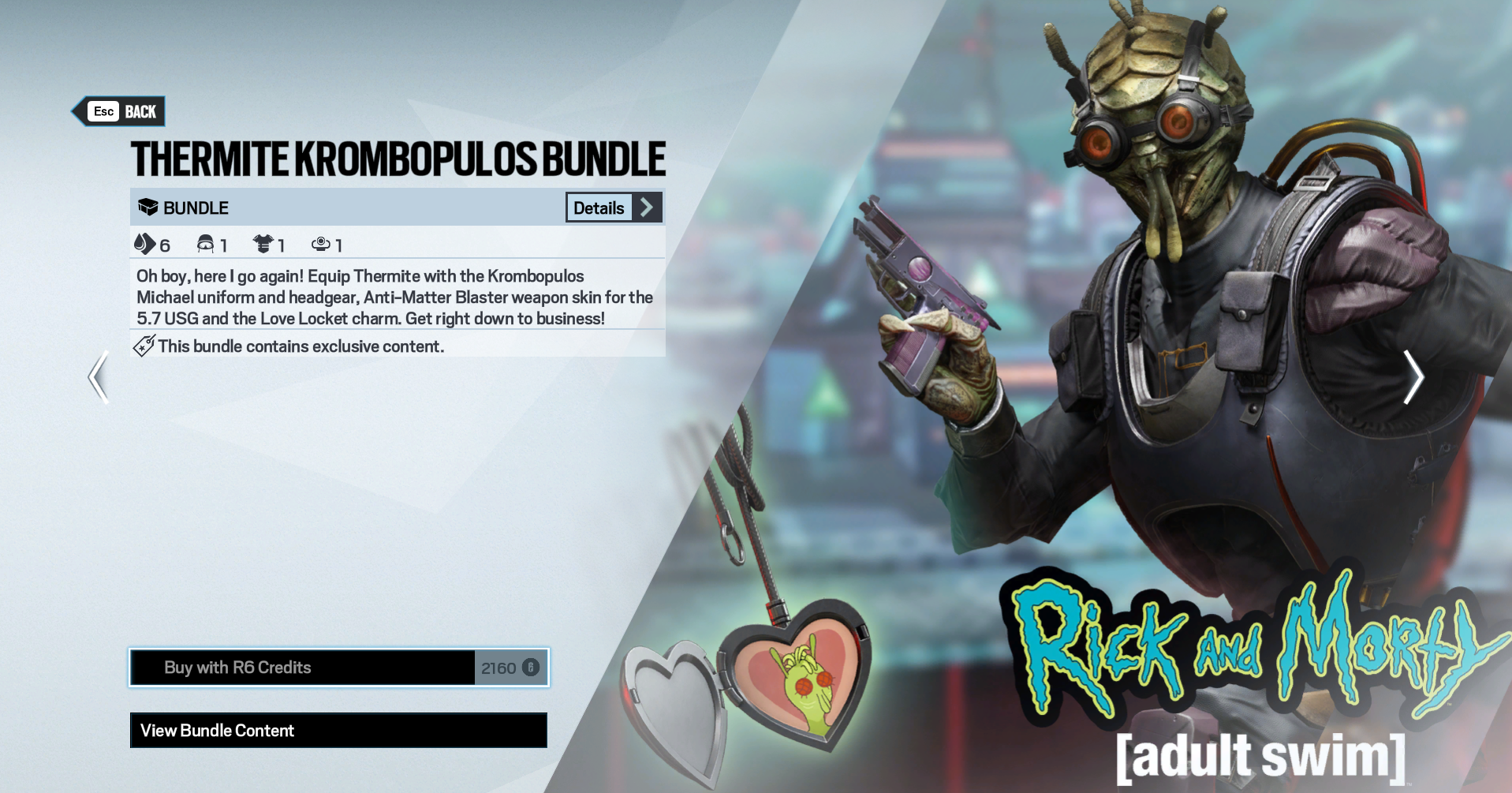 Rainbow Six Siege and Rick and Morty have recently partnered to produce some awesome skins, and Thermite was chosen to wear the Krombopulos Bundle. It looks like an Extraction skin! 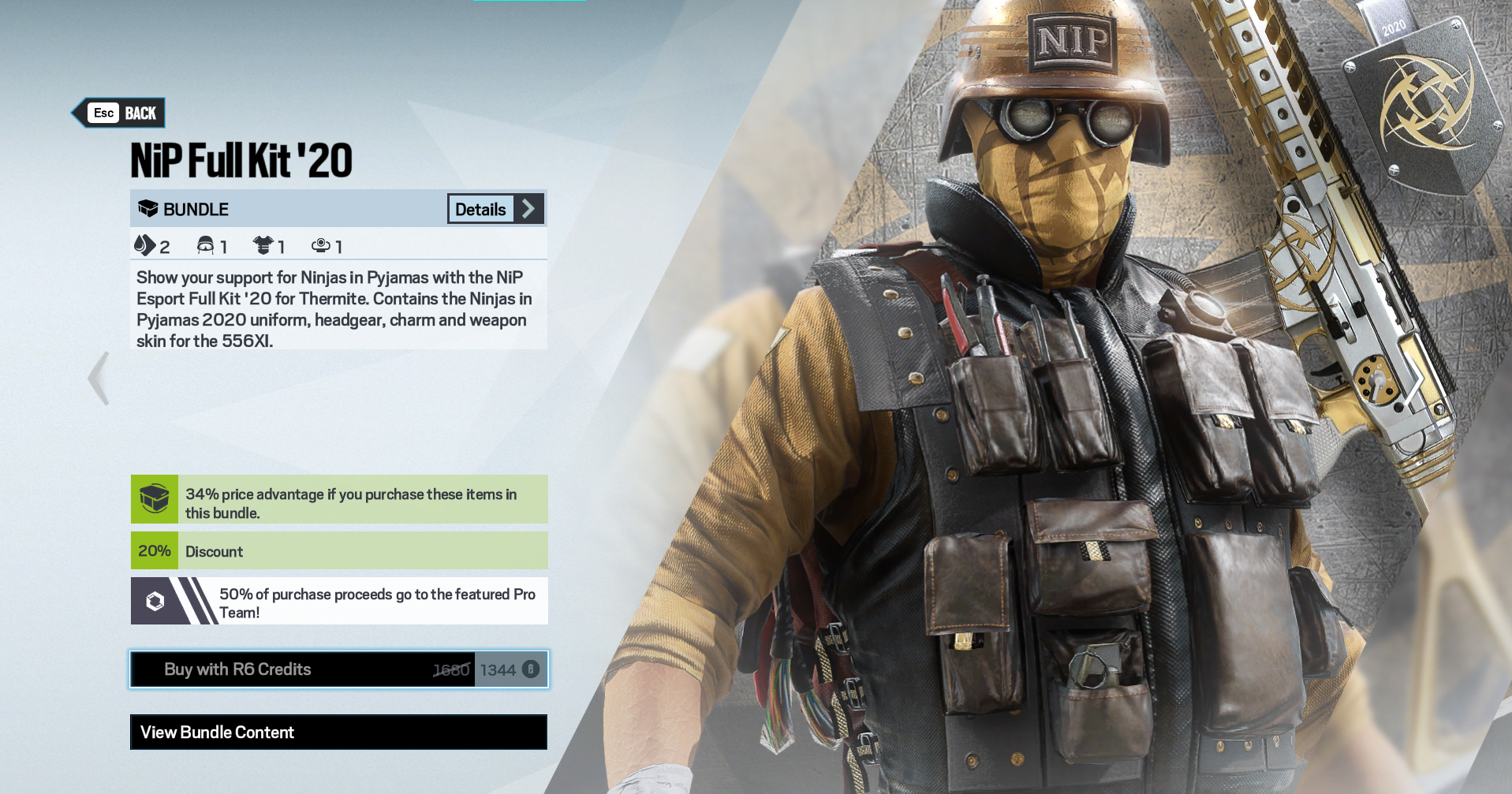 Thermite has an R6 Share bundle themed around the Six Invitational 2021 champions, Ninjas in Pyjamas! So if you want to rock the team's colors, you can do it by purchasing this bundle!