How has G2 Esports fit Blurr into their roster? We take a look

Here’s a look into how the new-look G2 are using their newest addition.

Following G2’s loss against Heroic, we looked at how G2 attempted to fit Blurr into the lineup.

Note: This article’s not judging Blurr’s performance but rather his roles and position. Whether perceived as good or bad, this is still just the opening game for Blurr.

Prano played a pure support role throughout his time on G2 Esports. Before planting the bomb, he got the wall opened on Thermite and played off angles on Jager on the defence.

This meant his kill statistics were never that good, but that’s acceptable as that’s not a support’s job.

Considering G2’s success -- they were one of just two teams alongside XSET to qualify for the last two Major playoffs -- it’s clear Prano was doing this job well.

Nevertheless, during the EUL's Stage 2, plant statistics showed a very clear drop-off. While Prano got down 16 of the team’s 17 plants during Stage 1, this dropped to just five out of nine during Stage 2. This was the joint-lowest number of any team in the EUL, tied with last-placed PWNZ.

This is an issue with the whole team’s attacks, but one that hurts Prano the most as the back-line and defuser carrier. Their plant numbers did improve for the Berlin Major, however.

During the last two stages, Blurr played Finka and Iana and was NAVI’s second entry player during Stage 2. On paper, this makes him a curious pick to replace Prano.

Before this, during the 2020 and 2021 Seasons, Blurr was NAVI’s soft breach and secondary entry player behind his current G2 teammate, Jack "Doki" Robertson. He peaked in this role during Stage 1 2021, a stage in which NAVI won the EUL, Blurr was the team’s top-rated player, and got the joint-most plants on the roster.

This gave G2 a few options by bringing him into the team. Have him as a straight replacement for Prano, reunite the entry duo after a somewhat weak few months in this regard during Stage 2 and Berlin, or put him on soft breach and move Jake "Virtue" Grannan over to hard support.

He immediately went to Jager -- Prano’s old role on the defense -- against Heroic on Villa.

This meant on the Aviator site, he went onto Jager, on Statuary he went to Wamai, and on Kitchen, he went to Kaid. This is the same operator order that Prano had during the last time G2 played on Villa, their 7-0 victory over Outsiders during Stage 2.

Switching to the attack, it was less clear-cut:

Blurr spawned with the defuser in just one of the five offensive rounds and played Thatcher, Flores, and Osa -- no hard breach operators.

Instead, Virtue and Doki shared Prano’s Ace role, and Virtue was also the top fragger with seven kills to two deaths in this half.

While just five rounds are not enough time to judge, Blurr seems to have moved to a secondary support role, droning in the main fraggers. This is similar to his role during his peak at NAVI.

Next week, it will be interesting to see whether the defuser stays with Doki or if that was just to facilitate Virtue, who was fragging out. While Ace does have a good gun, holding the defuser effectively kills Doki’s ability to entry, which was his main offensive role since joining G2.

Likely whichever player isn’t on Ace will be supported by Blurr in a secondary support role, possibly giving viewers the Doki/Blurr duo again. 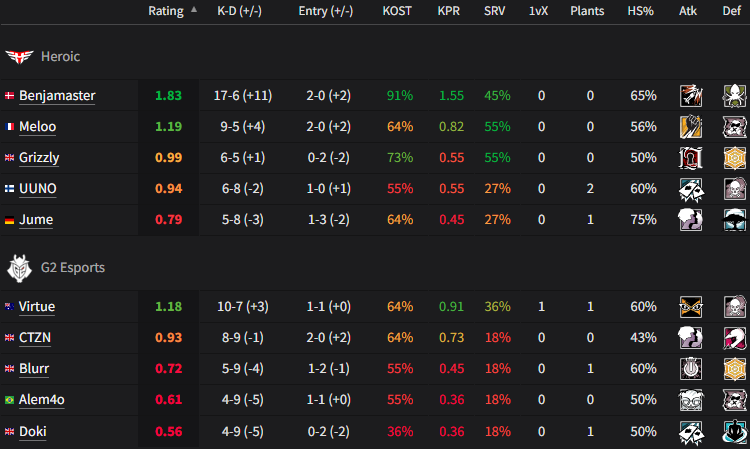