Echo is a defending Rainbow Six Siege operator, who is played in 12% of all rounds in SiegeGG-tracked matches.

Anitun has played the most rounds in their career with Echo. They are closely followed by Redeemer, whose favorite operator is Echo.

Echo is a Rainbow Six Siege operator who was introduced to the game in Nov. 2016 with the launch of Operation Red Craw.

He is an anchor, a defender who plays from the site. His Yokai Drones make him one of the best operators on defense, as his unique gadget is complemented with a very strong loadout.

Looking to master this defensive operator? Here's how!

Read more: What is an anchor in Rainbow Six Siege?

Masaru Enatsu grew up in Suginami, outside of Tokyo. Enatsu was fascinated with robots from an early age, so he started designing and programming drones to win competitions. He studied Electrical and Electronic Engineering at Tokyo Metropolitan University and later on joined the National Police Agency Security Bureau.

Enatsu worked on specific tech to help his team. Following the Nagoya hostage crisis, Enatsu was transferred to the Aichi Prefectural Police Department Special Unit. He eventually returned to Tokyo, where his technology and intel gathering skills fascinated Team Rainbow. 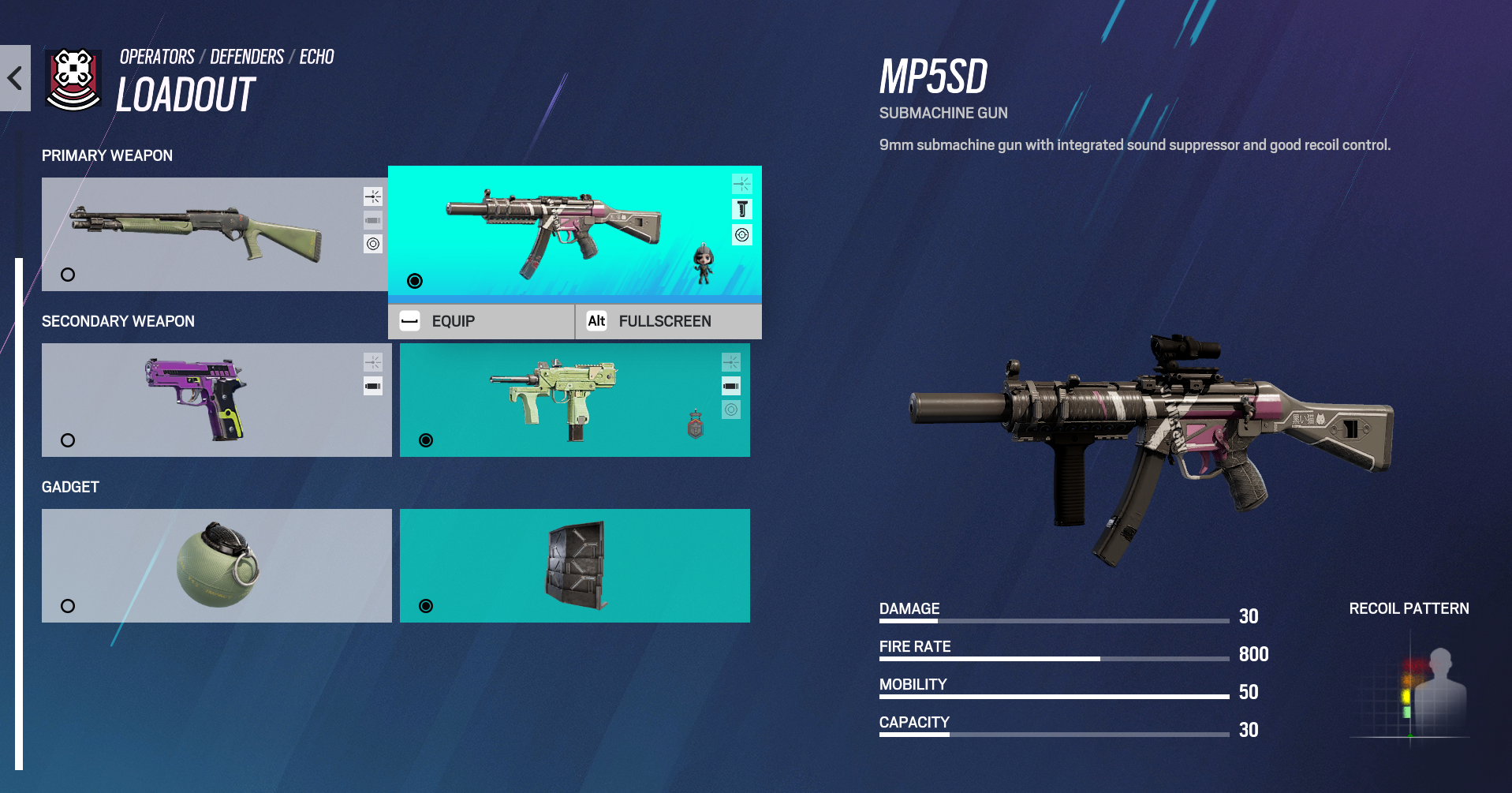 Echo's loadout makes him pretty strong on defense. The most used combination is the MP5SD Submachine Gun as a primary, the Bearing 9 Machine Pistol as a secondary, wrapped up by the Deployable Shield.

The MP5SD Submachine Gun has access to a 1.5x sight, which makes Echo pretty strong in long-distance gunfights. This very same gun also comes with a silencer which cannot be unequipped.

Although the gadget might vary depending on the site, the Deployable Shield gives Echo the chance to get some extra cover.

Echo is an anchor, an operator that stays on-site for the whole round. He is usually seen on cameras, gathering and giving information to the rest of his teammates.

While Echo is important for the entirety of the round, he is especially essential for the last 30 seconds of play. Echo's gadget can change the income of any round, even those that look unwinnable.

How to use Echo's gadget in Rainbow Six Siege

Echo's gadget is the Yokai drone. He has two drones, which can move around the map and can also be attached to the ceiling. Once they are attached, Echo can stun attackers' twice with each drone. Keep in mind that there's a cooldown timing after the Yokai's stun has been used, once you use two stuns you will probably have to wait a while.

So, imagine. It's a 1v4 situation and there are five seconds left. The attackers are planting while the Echo is still alive. Five seconds gone, Echo uses the stun. The plant was canceled, and defenders won. Although this might sound epic and very infrequent, it isn't. It happens a ton of times.

To master Echo's gadget, you must properly use his Yokai drones. Attach them to a ceiling, or place them in a corner until the last stages of a round. The potential behind his gadget is huge!

Echo's best counter is IQ. Using her Electronics Detector, she will be able to spot any electronic device within a range of 20 meters — including Echo's Yokai. Keep in mind, Echo's gadget isn't bulletproof. Any operator who sees the gadget will be able to easily shoot at it.

These are some of Echo's best skins in Rainbow Six Siege. 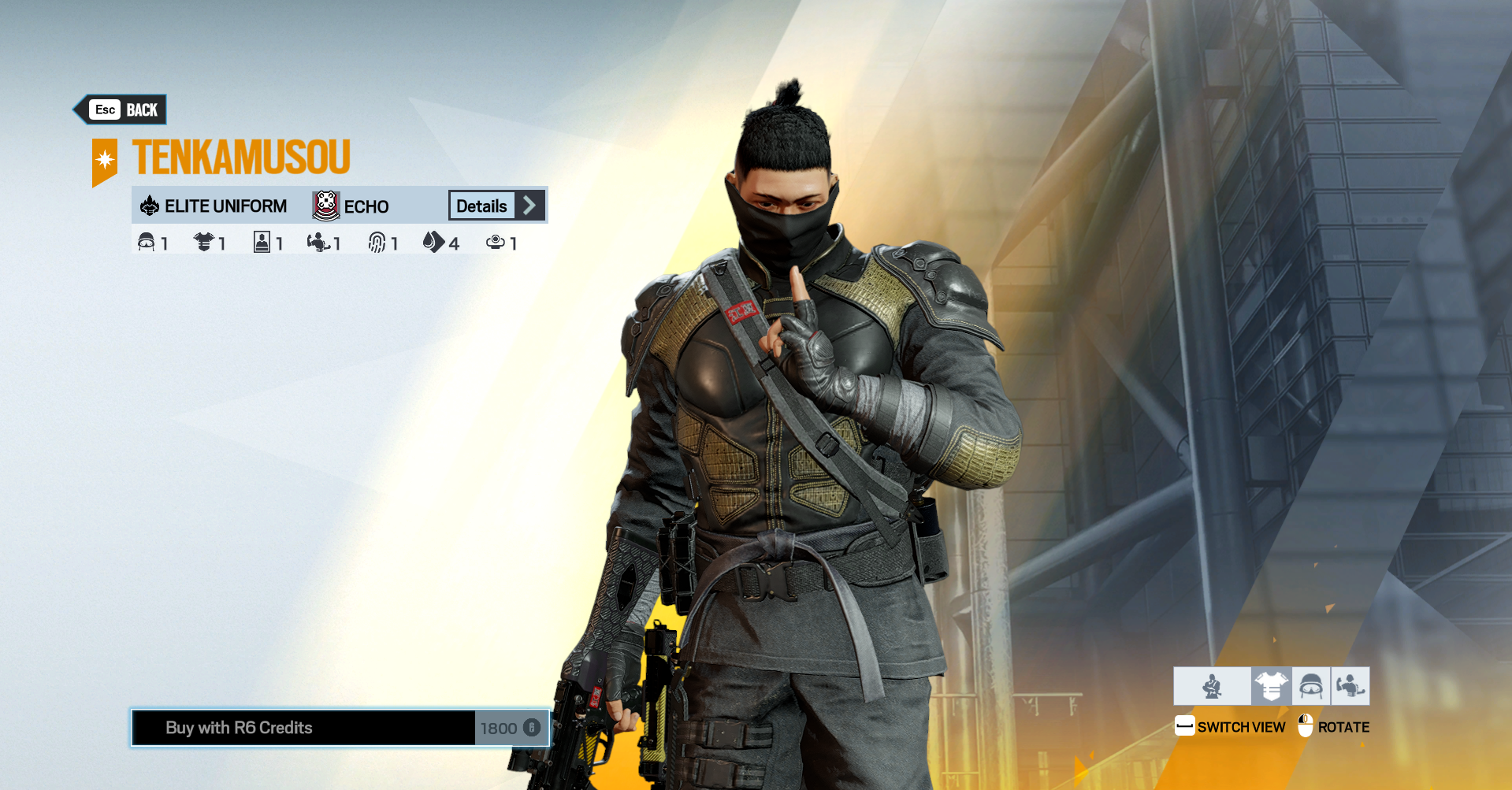 Echo's Elite Bundle is the Tenkamusou. It includes many special cosmetics just for Echo, including one of the best weapon skins for the MP5SD. It costs 1,800 R6 Credits. 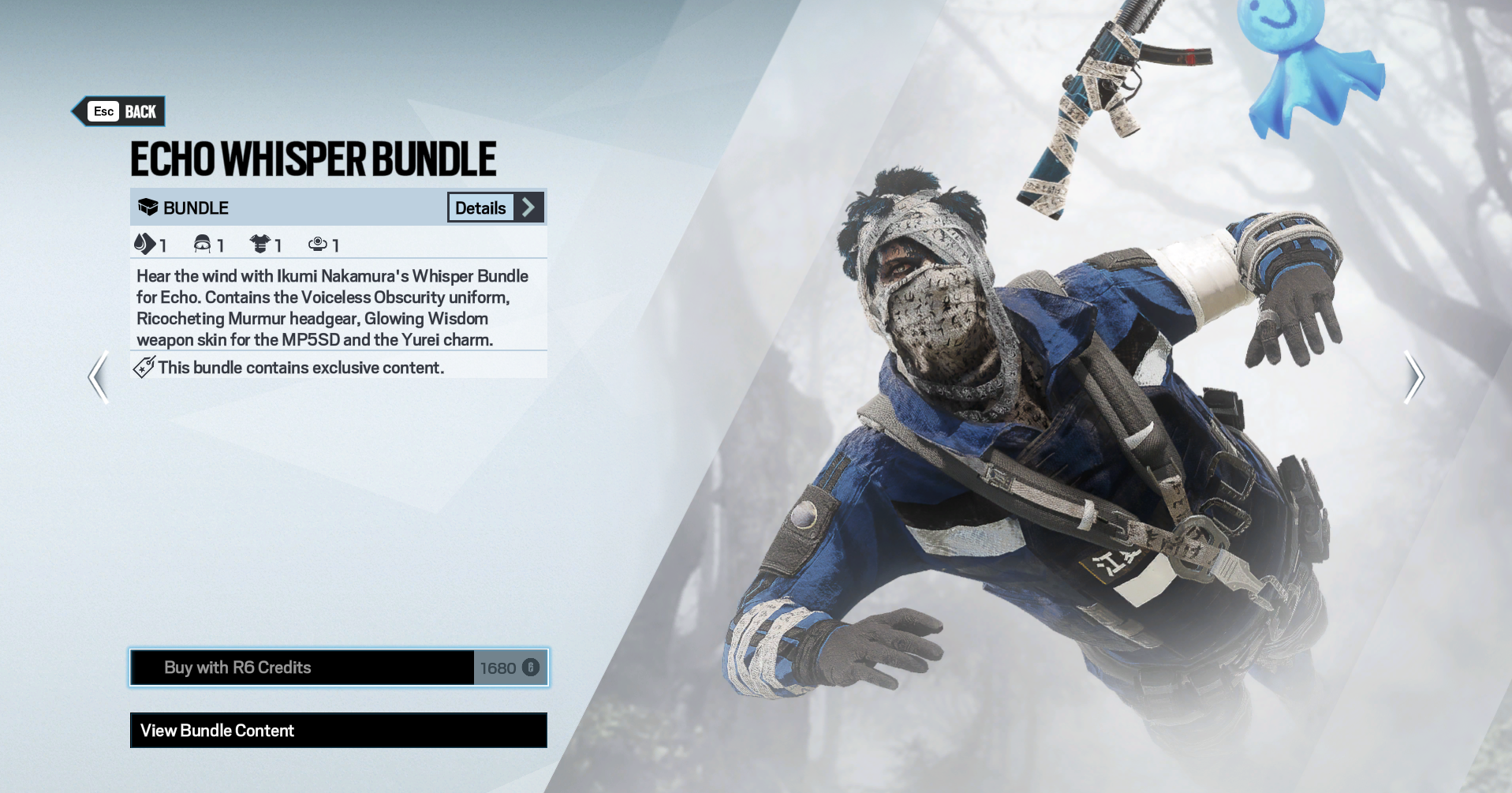 This is one of Ikumi Nakamura's creations for Rainbow Six Siege -- and probably not Ikumi's best one.  It can only be purchased with 1,680 R6 Credits. 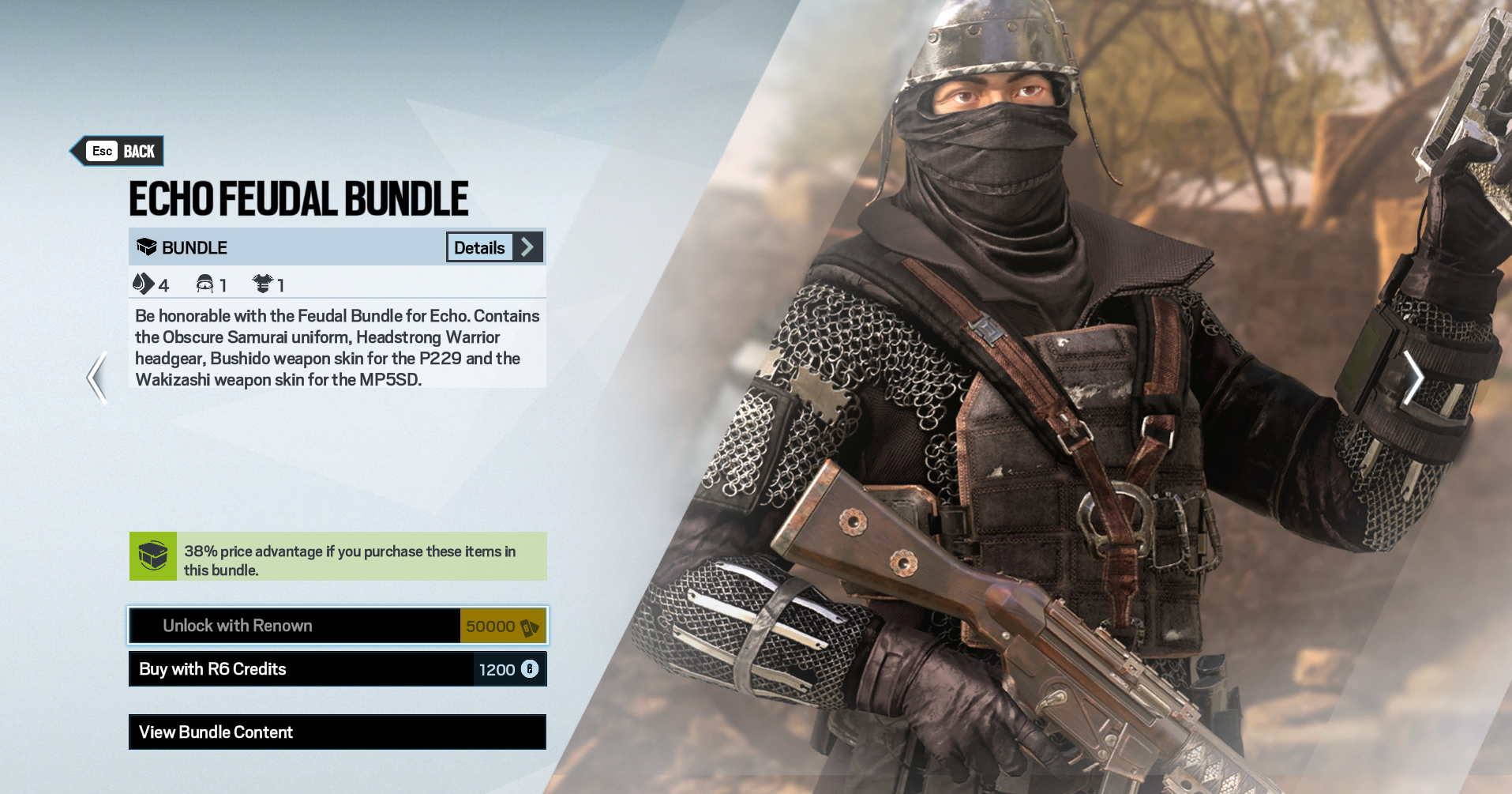 Although the previous options can only be obtained by spending R6 Credits, Echo's Feudal Bundle is available for 50,000 Renown. You can also purchase it for 1,200 R6 Credits.